Some of the artifacts include models of the 5 satellites launched by Nigeria e.g. NigeriaSat-1, NigeriaSat-X (which was built by Nigerian Engineers and scientists), NigComSat-1, NigComSat-1R  and most especially the flight qualified Structural Qualified Model (SQM) of Nigeria Sat-2 which is the exact replica of the structure of Nigeriasat-2 in orbit. Rockets models used in launching various Nigerian satellites, other space technological products, astronomy and space application products.

Other areas of interest include:

In May,2010, an object suspected to be meteorite exploded in midair and landed in Tse-Atov  TseFedah in Ukum LGA of Benue State of Nigeria about 17km from Zaki-Biam. The meteorites which were found 2km apart

Also on a 12th march, 2016 in Tse-Agena area of Mbatyula in Takum local government area of Taraba state meteorites landed

The astronomical corner has on display various NASRDA activities on space, narrations about outer space and the study of astronomy. It is a corner in the museum dedicated in pursuit of part of the Road Map of NASRDA which is to have a Nigerian in Space. On display is the bust of the first man in Space, Yurin Gagarin, Neil Armstrong and a space dedicated to the first Nigerian astronaut who is unknown.

Space Ambassador Corner: it is designed as a hall of fame for winners of the various categories of the Space Ambassadors Scheme. It is also a platform to encourage young people to aspire to excel in the area of Science Technology Engineering and Mathematics (STEM) which is the bedrock of Space science and technology.

Julie Payette Corner: During the visit of the Governor General of Canada to NASRDA she presented some gifts to the Agency in her capacity as an astronaut of repute and her work in the Space Science and Technology both in Canada and worldwide. Thus in her honor, a corner to show case these  gifts with some of them being used during her journey to space on board the International Space Station (ISS) are displayed at the National Space Museum.

Visitors to the Museum:

The National Space Museum is open on Mondays to Friday 9am-4pm and fees are charged in categories:

The Organizational Structure of the National Space Museum: 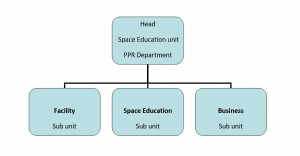 The Museum in Public Private Partnership:

In order to generate revenue for the government of Nigeria and to properly maintain the facility of the museum, the Agency is in partnership with the NASRDA Cooperative Society to carry out all commercial activity in a public private partnership arrangement.

How to plan a visit to the National Space Museum:

For groups, schools, organisations etc. a formal letter stating date of visit, number of visitors and time of visit be written to the Director General/Chief Executive, NASRDA.