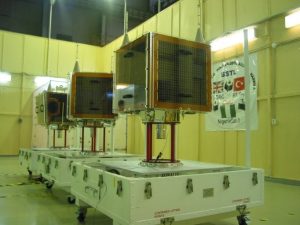 On 26 September 2003 Nigeria launched its $13 million national satellite NigeriaSat-1 in Plesetsk, Russia under a seven-nation constellation handled by a Russian firm, Cosmos. Nigeriasat-1 is a low earth orbit micro satellite for disaster monitoring looking spacecraft, 5-year target design life-span orbit 700km.NigeriaSat-1 is one of five satellites in a network called the Disaster Monitoring Constellation(DMC). The other partners in the international consortium are UK, China, Algeria, Turkey, Thailand and Vietnam. Each satellite belongs to one country, and share information with each other when disaster monitoring is needed. The Disaster Monitoring Constellation satellites, were built by a British-based company, Surrey Satellite Technology(SSTL), which also trained technicians from Nigeria and some of the other countries involved. The processed images from the DMC are distributed to relief teams by the Reuters AlterNet Foundation. The Reuters Foundation launched AlertNet in 1997 to help the work of relief professionals around the world.

NigeriaSat-1 has 3 spectral bands namely; Green: 0.52-0.62µm, Red: 0.63-0.69 µm and NIR: 0.76-0.9 µm. It is one of the Disaster Monitoring Constellation (DMC) satellites and has a swath width of 600km and revisit cycle of 3-5 days. It has spectral resolution comparable to SPOT XS and spatial resolution comparable to Landsat TM. The camera is operated in two banks and used to produce images with approximately 32 m ground sampling distance (spatial resolution), across a swath width of approximately 600 x 600 km.

The combination of these characteristics implies that NigeriaSat-1 has great potentials for forestry monitoring. With this satellite in space, the problem of data access for forest monitoring is no longer there and the time is now ripe for utilization of space acquired information in natural resources management.

Nigeriasat-1 data will  enhance sustainable development and support disaster management in the country and other parts of the world. The data is currently being used to address key socio-economic problems in the country, for example revision of the Land Use/Land Cover, which was last revised in 1995 using SPOT imageries; Satellite-based Environmental Change Research in the Niger-Delta area; Development of Predictive Models for Desertification Early Warning; Mapping and Monitoring of the Impact of Gully Erosion in South-Eastern part of Nigeria; Settlements and Major Roads Mapping Project; Flood Mapping in the Kainji Lake Area; Deforestation in the South-Western part of Nigeria etc.

As part of the Disaster Monitoring Constellation (DMC), Nigeriasat-1 images have been used in various part of the world for disaster management e.g. Asian Tsunami disaster (20 of 300 X 150 Km supplied); Huricanne Katrina etc. In 2007, Nigeriasat-1 data through International Charter has been used to respond to floods in Argentina/Parguay, Uruguay,North Korea, Pakistan, China, Vietnam, North Korea, New York, West Africa; volcanic eruption in Nevado, Columbia, Yemen; oil spill in Lyme-Bay, UK; fires in California; locust threat in Algeria, Syria etc. These images along with other DMC images are made available free of charge for disaster management. In conjunction with other DMC satellites, Nigeriasat-1 has also been used for various mapping campaign e.g. the Amazon, Vietnam coastal areas, European Union States.