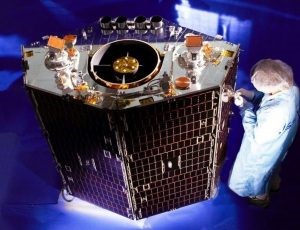 NigeriaSat-2.is a joint satellite program proposed by South Africa and supported by, Nigeria, Algeria and Kenya.  would form the cornerstone of the African Resource Management (ARM) Constellation satellites, to make African user community have access to real-time, unrestricted and affordable satellite data, thereby ensuring effective resource and environmental management in Africa. The countries involved would collaborate in building capacity to support and transfer space technology, building forth on the existing indigenous knowledge. Participating counties to agree on modality for the building and launching of the satellites and coordination of the constellation.

On Oct 10, 2006 British satellite specialists Surrey Satellite Technology Ltd (SSTL) signed a contract in Abuja for the supply of the NIGERIASAT-2. The selection of SSTL by the National Space Research and Development Agency (NASRDA) of Nigeria follows a detailed technical evaluation and due diligence undertaken by NASRDA’s procurement advisor, Telesat of Canada, confirming the UK company’s position as the world-leading supplier of advanced operational small satellites.

Nigeria took another large step in the development of their National Space Plan, building upon the existing NIGERIASAT-1 Earth Observation microsatellite supplied by SSTL in 2003 and the NIGCOMSAT-1 communications satellite currently being built by China for launch in 2008.

NIGERIASAT-2 will address many of the issues fuelling African nations such as mapping, water resources management, agricultural land use monitoring, population estimation, health hazard monitoring and disaster mitigation and management”.

NigeriaSat-2 is designed to have more powerful and flexible capabilities to support the NGDI (National Geospatial Data Infrastructure) project. NigeriaSat-2 earth observation system was planned to be implemented as a stand alone system that will, at the same time, have the capability to interface with existing NASRDA data collection, dissemination and analysis infrastructure. This is achieved using significantly more powerful and flexible payload. Camera-based; 2.5 m GSD panchromatic; 5.0 m GSD in 4 spectral bands and 32 GSD also In 4 spectral bands. Swath width is 20 x 20 km (2.5 and 5.0 GSD) and 300×300 km (32 GSD). The 32 m resolution imagery ensures compatibility with the NigeriaSat-1 imagery while the high resolution imagery of 2.5 m and 5 m GSD, with improved geolocation accuracy supports several new high/very high resolution applications including those in the NGDI project.

The E-OP shall operate as a push broom scanner. Images in the several modes shall be constructed from sections of a push broom scan A Strip Mode the width of the images shall be equal to the Swath Width (SW) and as long as needed. The capacity of the image memory, which is in the spacecraft bus, shall be the limiting parameter on the length of the image. No aspect of the design of the cameras shall limit the length of a continuous image. The E-OP shall be capable of generating images of areas several swath widths wide and long by scanning a set of contiguous strip images. The area shall be limited only by the rotation times between strip images. The use of the on-board memory shall be managed so that available memory does not limit the imaged area. The E-OP and ground processing shall be capable of producing stereo images of selected areas on a single orbit. To record the first image, the spacecraft is rotated in pitch and roll to the desired position, stopped, and the image recorded. To record the second image, the spacecraft is rotated in pitch and slightly in roll, stopped, and the second image of the same area recorded. It shall be possible to record a stereo triplet, i.e. three images of the same area in a single pass.

Imagery is captured for specific areas and application needs. NigeriaSat-2 can provide data to meet data requirements for the following