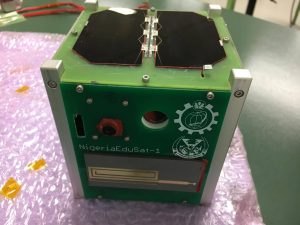 NASRDA in collaboration with the Federal University of Technology Akure (FUTA) built and launched a nano-satellite code named NigeriaEdusat-1.The collaboration was in conjunction with the Japanese Birds-1 program which comprises Japan, Ghana, Mongolia, Nigeria and Bangladesh universities which was hosted by Kyushu Institute of Technology, Japan. It was launched from the Kennedy Space Center in Florida, USA into orbit on 3rd of June, 2017.

Dr.  Ibukun Adebolu from FUTA represented Nigeria on the team at Kyushu Institute of Technology while the ground station in Nigeria was solely designed and built in Abuja, NASRDA headquarters by a team of engineers/ scientist led by Dr. Tanko Yakassai (a member of the Nigeriasat-2 KHTT team).