DEVELOPMENT OF SPACE BASED SYSTEMS FOR NATIONAL SECURITY

HomeDEVELOPMENT OF SPACE BASED SYSTEMS FOR NATIONAL SECURITY

DEVELOPMENT OF SPACE BASED SYSTEMS FOR NATIONAL SECURITY

The aim of this research is to evaluate the effect of over a decade insurgency and civil unrest on the land use land use cover variations and its consequences on infrastructure and utility service delivery in the North Eastern Nigeria using Landsat ETM+, Landsat 8 and sentinel-2 imageries acquired in 2008, 2014 and 2020.

The rest of the paper is organized in four (4) sections:

Section 1 provides a brief background/introduction of the challenging matter of insecurity within the Nation of Nigeria; and in particular in the North East outlining the approaches and methodology, and results as obtained.

Section 2 provides the aims and stated objectives of the research.

Section 4 provides a general description of the study area; the datasets employed in the duration of the research and the methodological approach as used in attaining the aim and stated objectives of this research; explaining the supervised classification and post-classification change detection techniques.

Section 6 provides the conclusion of the research paper and outlined recommendation (s).

The insurgency and terrorism has been identified as powerful form of combined human underlying forces, which has led to main destructive changes in land use and land cover of societies in present history. The north eastern Nigeria was faced with dire landscape alteration following the insurgency that started early 2000 until recent time that led to spontaneous outflow of people from the affected areas into the other as well as capital city for security and survival.

This study looks at the effect of over a decade insurgency and civil unrest on the land use and land cover variations and its consequences on infrastructure and utility service delivery in the north eastern Nigeria using Landsat ETM+, Landsat 8 and sentinel-2 imageries acquired in 2008, 2014 and 2020. Foremost, the three images were classified using the supervised classification scheme and the accuracy of classification assessed to examine their appropriateness for change detection. Thereafter, we used post-classification analysis to evaluate land use land cover changes.

The aim of this research is to evaluate the effect of over a decade insurgency and civil unrest on the land use land use cover variations and its consequences on infrastructure and utility service delivery in the North Eastern Nigeria using Landsat ETM+, Landsat 8 and sentinel-2 imageries (2008, 2014, 2020).

The objectives of this research are as follows:

Nigeria is a country blessed with diverse resources, however the lack of technological knowhow is the major problem affecting the security situation in Nigeria. The most recent security challenges in the country are Boko Haram insurgence, Fulani herdsmen brutality and farmers dispute. Despite the effort put in by the Federal government of Nigeria to control the situation, the resultant effect seems ineffective because of inaccuracies in location of conflict zone, secondly, poor surveillance of the neighborhood by security department of Nigeria. Thirdly, most of the personnel were not trained on how to use the GIS and remote sensing to monitor crime and other related events in Nigeria.

Providing an effective national security program requires identifying and assessing vulnerabilities from all types of hazards and threats. It includes developing capabilities to prevent, protect from, respond to, and recover from catastrophic incidents. Maintaining continuous situational awareness is now generally accepted as the foundation for successfully maintaining national security. Acquiring the ability to collaborate with diverse stakeholders; assess vulnerabilities; and determine priorities for the resource allocation is challenging.

4.0 SDGs ADDRESSED BY THE PROJECT

SDG 1: NO POVERTY: To eradicate extreme poverty for all people everywhere, currently measured as people living on less than $1.25 a day. To ensure that all men and women, in particular the poor and vulnerable have equal rights to economic resources as well as access to basic services, ownership and control over land and other forms of property, inheritance, natural resources, etc.

SDG 2: ZERO HUNGER: Sustainable Development Goal 2 aims to achieve zero hunger. It is one of the 17 sustainable development goals established by the United Nations in 2015. The mission is to end hunger, achieve food security and improve nutrition, and promote sustainable agriculture.

SDG 4: QUALITY EDUCATION: The goal is targeted at ensuring equal access for all men and women to affordable and quality technical, vocational and tertiary education, including university.

SDG 11: SUSTAINABLE CITIES AND COMMUNITIES: This goal is aimed at ensuring access to safe, affordable, accessible and sustainable transport systems for all, improving road safety, ensure access for all to adequate safe and affordable housing and basic services and upgrade slums.

The North East region is a geopolitical zone in Nigeria. It is composed of the following state: Adamawa, Bauchi, Borno, Gombe, Taraba, and Yobe. It occupies slightly less than one-third of Nigeria’s total area and had a projected population for 2011 of 23.6 million, or 13.5% of the country’s population. The inhabitants are mainly Fulani. Only Borno state has Kanuri people as majority. There are more than 100 minority ethnic groups.

The area has the largest national park (Gashaka Gumti National Park) and the Mambilla Plateau which encompasses the large part of Taraba state with an average elevation of 1,600 meters. The study area has relatively humid weather, annual rainfall ranges between 700 and 1500 mm with 140-150 rainy days. Temperature range is between 15-20c during harmattan (December to February) while in the hot dry season (March to May) it is 32-38C. Major crops grown are maize, sorghum, cowpea, groundnut and vegetables. The livestock kept include cattle’s, sheep, goats, pigs, and poultry. 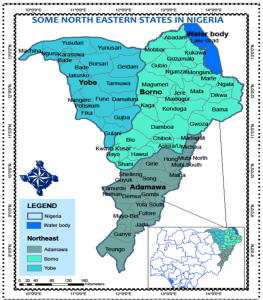 In this study, data processing and analysis procedures follow these four steps discussed in their sequential order of operation. The steps are:

Data processing was carried out in Erdas Imagine. Figure 1 shows the data processing workflow. Pre-processing include atmospheric correction and geometric correction. It is computational efficient, simple to use and yield accurate spectra collection. Thereafter the images were rectified, mosaicked and area of interest was subset for further processing. 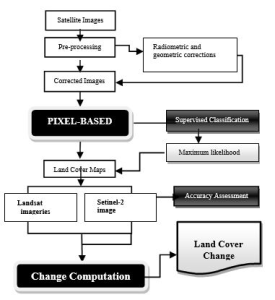 In order to do that, training polygons were selected and digitized on-screen as representative of each class based on terrain knowledge acquired from Google earth, RGB color composition images and elements of visual interpretation such as color, shape etc. observed on the images of the study areas. Thereafter, we assessed the accuracy of the classified map using confusion matrix. Accuracy assessment involves statistical estimates obtainable from remote sensing classification output and an independent reference dataset in order to measure the probability of error for the classified map.

Accuracy assessment was carried out for 2008, 2014 and 2020 classification maps produced from Landsat 7 ETM+, Landsat 8 and sentinel-2 data. Due to lack of reference data for the study area as ground truth data, it was difficult to carry out accuracy assessment with independent data. Alternatively, stratified random sampling design was adopted with sample points generated and their locations chosen to represent the eight land cover classes considered in the area. The three classified images were used as input data to detect the pattern of change in land use land cover within the study area.

Many Change Detection reviews based on Pixel-Based classification of remote sensing data have been review. One of the most commonly used change detection method is Post-classification, which a method that determines the difference between independently classified images for each of the dates in question. Post-classification comparison algorithm allows the type of land cover changes that have occurred within the time frame to be recognized and quantified. The technique is selected because it minimizes the impact of geometric and radiometric differences and the most suitable where data from different sensors are involved as in this case. The only drawback of the method is that the result obtained depends on the accuracy of the individual classifications, hence the need to be more careful during classification operation. Quantitative analysis of class change is presented on the table and percentage bar scale.

Eight feature classes of Built up, Vegetation, Bare surface, Cropland, Water body, Scrubs cover, Tree cover and Grassland were extracted from the satellite images. The area coverage of each feature classes is shown in Table 4.1 below.

Table 1: Area covered by the Land cover Classes in the study area 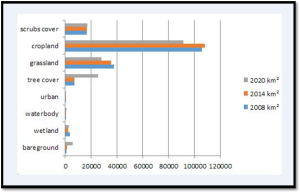 It reveals a steady increase in built up from 0.55% to 0.74% to 0.79%. Other classes such as grassland and cropland experiences reduction and this could be correlated to the effect of food and security within the study area.

Nigeria has been beclouded with a myriad of security issues that has threatened us at every front. Various literatures as viewed thus far stated the constant failure of its systematic and institutional architecture, as this amongst others has overstretched the present security infrastructure presently on ground which if not improved for whatever reason could lead to its breakdown. Although, these varied observations may be valid, there seems a gap in developing a well-defined strategic model to overthrown the widespread and systematic security inefficiencies in Nigeria. Furthermore, it is pertinent and of importance that attention be directed to quell the myriads of security threats which could be detriment to the socioeconomic development of our dear country, Nigeria.

The advance in space science and technology presents numerous possibilities to be benefitted as a nation and indeed a continent as a whole. Consequently, this proposal underscores the weaknesses in our present security architecture and thus suggests a security model to bring to an abrupt end the incessant insurgencies in Nigeria.  The adopts the use of Space Based Systems, in particularly remotely sensed imagery information. Although a desk review was conducted with the use of secondary materials largely sourced from government publications, academic journals and media reports, the research employed the use of various datasets such as the Landsat 2008; Landsat 2014 and sentinel-2 2020 for further data analysis and interpretation. Thus, the results gathered suggest strategic ways in addressing security for socioeconomic development. This would be useful to decision makers in the country to further facilitate conversations as regards enacting laws and regulations across the various tiers of governance as concerning Space Based Systems and Technology.