SDG ADDRESSED BY THE PROJECT

Ambulances are one of the modes of transportation used to provide medical assistance to victims of emergencies. The present study was aimed at assessing the emergency response travel time of ambulances for medical emergencies in Abuja Municipal Area Council of Abuja, Nigeria based on provided services in terms of time parameters. This was achieved by integrating Geographic Information System (GIS)-based network analysis. The datasets utilized for this research were obtained from the Geo-Referenced Infrastructure and Demographic Data for Development (GRID3) portal and National Emergency Medical Services and Ambulance Scheme (NEMSAS). The results showed that the ambulance service providers in Abuja Municipal Council area are mostly located in the urban part of the city, leaving the suburban settlements underserviced. Recommendation suggests that the FRSC should locate more ambulance centers in the underserved areas.

There is an increasing occurrence of disasters arising from road traffic accidents, ailing patients, domestic accident resulting in several loss of lives. This has attracted a lot of interest on how to address these disasters as emergencies. However, a systematic study of emergency response in disasters (ER) has been ignored (Yi and Shaoze, 2020).  The loss of lives can be mitigated and several lives can be saved with an effective emergency medical service system. An emergency medical service system is a system designed with an ultimate goal to save lives (Laura and Maria, 2010). These services include the provision for ambulance services. An ambulance service makes provision for vehicles which are required to respond rapidly to medical emergencies Ethel, et al., (2017). These vehicles essentially have in them first aid medical needs to stabilize patients before reaching the hospital. However, Ethel, et al., (2017) postulates that, in time of an emergency, when there is a call for an ambulance service, a number of factors may affect the response time (how quick an ambulance service can reach the patient). Factors such as the location of emergency services stations, the number of ambulance vehicles available at each station, road conditions and traffic volumes (i.e., a response time threshold) were highlighted. Therefore, the effectiveness of any ambulance service is measured by its response time. Several response times have however been adopted as standards for emergency medical services (EMS). Ian, et al., (2012) explored whether an 8-minutes EMS response time was associated with mortality. Johan, et. al., (2020) adopted a standard of 0 to 6 minutes, 7 to 9 minutes, 10 to 15 minutes, and > 15 to analyze out-of- hospital cardiac arrest survival rate. 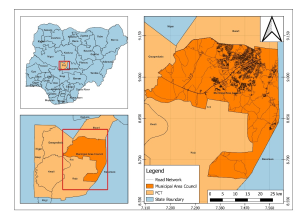 The main aim of this research is to assess the emergency response travel time for medical emergencies.

The following are the objectives outlined to achieve the aim of this research:

Ambulance Service is very important in instances of emergency. The goal is to get to the point of demand in good response time so as to stabilize patients with first aid care before transporting them to the hospital where their lives can be saved. The utilization of ambulance services in response to emergency medical cases has been an integral part of healthcare service delivery for a long time in most parts of the world (Swalehea and Aktas, 2016). Emergency response activity relies on transportation networks. Emergency facility location interacts with transportation networks clearly. Yuan, et al,. (2021). Ambulance services utilize road networks every motorist use to get to the point of demand and transport the patients to the hospital. This has made the task of reaching the patient “in good time” to be particularly challenging. Even though most of the emergency hospital ambulances are equipped with paramedics, they are unable to reach the incident site in good response time due to lack of verification of the shortest route and fastest time. A large number of vehicles and road users have resulted in severe transportation delays, lower fuel efficiency, safety risks, and accidents in the traditional system. Khalid, et al. (2021), Inadequate healthcare can also be attributed to uneven spatial distribution of Health Care Facilities in the country. Some areas are more advantageous than others, creating disproportion in service delivery (Eta et al., 2021).

According to the guidelines for the Operation of National Ambulance Services in Nigeria, Nigeria has no formal legal framework for coordination and regulation of ambulance services. This has led to several preventable losses of lives from road traffic incidents, terrorist attacks, natural disasters, civil uprising, domestic violence and other medical complications of childbirth, heart attacks, stroke and acute asthmatic attack. These situations require prompt and professional attention to save lives and improve health indices by reducing mortality and morbidity. These untoward losses can be minimized by deploying intelligent decision system and shortest path algorithms to optimize ambulance travel time to and from accident scene to the nearest hospitals (Ogunwolu et al., 2018).

SDG ADDRESSED BY THE PROJECT

SDG 3 or Global Goal 3 is “Good Health and Well-Being,” and it is the third goal in the sustainable development goals. One of the United Nations’ 17 Sustainable Development Goals, it was adopted in 2015. To ensure healthy lifestyles and promote well-being for all people of all ages is the phrase used officially. SDG 3’s aims cover and concentrate on a number of facets of a healthy life and lifestyle.

The Zonal toolset was also utilized to analyze the values of the population (raster) within the serviced area polygon and the result reported in to a table, and further summarized to know the total sum of the people serviced within the study area. This was achieved by overlaying the service area polygons on the Population data (raster) and identifying cells in the value raster within the serviced area. The base map of AMAC was downloaded from OpenStreetMap (OSM). OSM can be accessed as an ArcGIS Online Service that provides free read-only access to OpenStreetMap as a base map for GIS work in ESRI products such as ArcGIS Desktop (Ahmed et al., 2017). 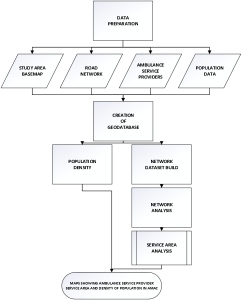 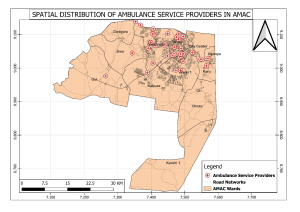 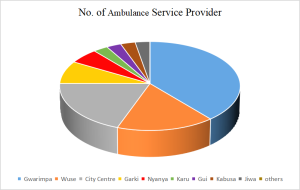 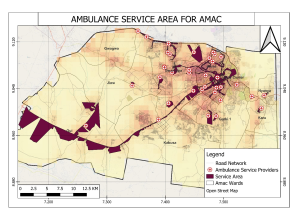 Figure 3 displays the service area polygons showing the serviceable area for the ambulance service providers and the area not within the polygon cannot be reached at the specified impedance. 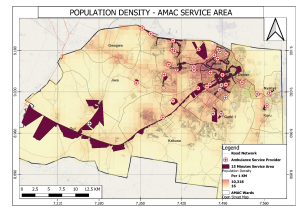 This study performed a detailed network analysis with the available ambulance service providers’ data and recommends that the FRSC should site more ambulance hubs in areas that are not served. Some places to be considered are Aideyan Osaro Royal Street in Kabusa, Dalhatu Road in Gwagwa, Rabiu Musa Kwankwaso Street in Orozo, Karshi Roundabout – along Karshi Road in Karshi and David Ejofor Street in Apo – Garki due to their high population density. The ambulances need to be more dispersed rather than concentrated, hence, further studies can explore the gab.

Ahmed, S., Ibrahim, R. F., and Hefny, H. A. (2017): GIS-Based Network Analysis for the Roads Network of the Greater Cairo Area. Proceedings of the International Conference on Applied Research in Computer Science and Engineering ICAR’17, Lebanon, 22-06-2017, published at http://ceur-ws.org

Guidelines for the operation of National Ambulance Services in Nigeria. GONASN. Available on www.health.gov.ng (accessed on 08 August 2021).